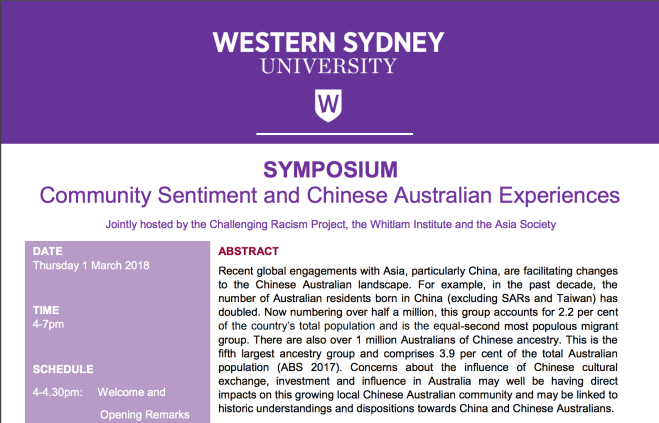 Community Sentiment and Chinese Australian Experiences Jointly hosted by the Challenging Racism Project, the Whitlam Institute and the Asia Society

Recent global engagements with Asia, particularly China, are facilitating changes to the Chinese Australian landscape. For example, in the past decade, the number of Australian residents born in China (excluding SARs and Taiwan) has doubled. Now numbering over half a million, this group accounts for 2.2 per cent of the country’s total population and is the equal-second most populous migrant group. There are also over 1 million Australians of Chinese ancestry. This is the fifth largest ancestry group and comprises 3.9 per cent of the total Australian population (ABS 2017). Concerns about the influence of Chinese cultural exchange, investment and influence in Australia may well be having direct impacts on this growing local Chinese Australian community and may be linked to historic understandings and dispositions towards China and Chinese Australians.

With an official welcome from WSU Deputy Chancellor Liz Dibbs and opening remarks by Tim Soutphommasane (Race Discrimination Commissioner) and Philipp Ivanov (CEO of Asia Society Australia), this symposium will provide a forum to discuss contemporary challenges facing the Chinese Australian community. The symposium will consider the current state of public debate/community sentiment regarding Chinese Australians; present empirical evidence of the intercultural relations challenges that are emerging in Australia; and facilitate engagement and dialogue between academic researchers, policy analysts, Chinese Australian community members, and government representatives. It will include papers presented by three leading academics in the field, followed by a panel discussion among community members.