ABOUT – We’re a group of scholars working across a number of fields and intellectual traditions. We come together to read and discuss new ideas with relevance to our teaching and research. The group has a broad interest in developing our knowledge of critical theory as it pertains to a range of other theoretical traditions, empirical fields and geographical regions. By closely reading and debating new and old books we aim to enhance and enrich our research, teaching and practice in ways that further challenge the structures we are all embedded in. This includes, but is certainly not limited to, the Australian academy itself.

Shaking up the City: Ignorance, Inequality and the Urban Question

Our first book for 2022 is Shaking up the city: ignorance, inequality and the urban question by Tom Slater, published by University of California Press.

Description – Shaking Up the City critically examines many of the concepts and categories within mainstream urban studies that serve dubious policy agendas. Through a combination of theory and empirical evidence, Tom Slater “shakes up” mainstream urban studies in a concise and pointed fashion by turning on its head much of the prevailing wisdom in the field. To this end, he explores the themes of data-driven innovation, urban resilience, gentrification, displacement and rent control, neighborhood effects, territorial stigmatization, and ethnoracial segregation.

With important contributions to ongoing debates in sociology, geography, urban planning, and public policy, this book engages closely with struggles for land rights and housing justice to offer numerous insights for scholarship and political action to guard against the spread of an urbanism rooted in vested interest. 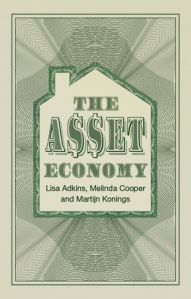 Our fourth and final book for 2021 is The Asset Economy, by Lisa Adkins, Melinda Cooper and Martijn Konings, published by Polity.

Description – Rising inequality is the defining feature of our age. With the lion’s share of wealth growth going to the top, for a growing percentage of society a middle-class existence is out of reach. What exactly are the economic shifts that have driven the social transformations taking place in Anglo-capitalist societies?  Lisa Adkins, Melinda Cooper and Martijn Konings argue that the rise of the asset economy has produced a new logic of inequality. Several decades of property inflation have seen asset ownership overshadow employment as a determinant of class position. Exploring the impact of generational dynamics in this new class landscape, the book advances an original perspective on a range of phenomena that are widely debated but poorly understood – including the growth of wealth inequalities and precarity, the dynamics of urban property inflation, changes in fiscal and monetary policy and the predicament of the “millennial” generation. Despite widespread awareness of the harmful effects of Quantitative Easing and similar asset-supporting measures, we appear to have entered an era of policy “lock-in” that is responsible for a growing disconnect between popular expectations and institutional priorities. The resulting polarization underlies many of the volatile dynamics and rapidly shifting alliances that dominate today’s headlines.

Our third book for 2021 is Insurgent Empire: Anticolonial Resistance and British Dissent, by Priyamvada Gopal and published by Verso.

Description – How rebellious colonies changed British attitudes to empire. Insurgent Empire shows how Britain’s enslaved and colonial subjects were active agents in their own liberation. What is more, they shaped British ideas of freedom and emancipation back in the United Kingdom. Priyamvada Gopal examines a century of dissent on the question of empire and shows how British critics of empire were influenced by rebellions and resistance in the colonies, from the West Indies and East Africa to Egypt and India. In addition, a pivotal role in fomenting resistance was played by anticolonial campaigners based in London, right at the heart of empire. Much has been written on how colonized peoples took up British and European ideas and turned them against empire when making claims to freedom and self-determination. Insurgent Empire sets the record straight in demonstrating that these people were much more than victims of imperialism or, subsequently, the passive beneficiaries of an enlightened British conscience—they were insurgents whose legacies shaped and benefited the nation that once oppressed them.

Our second book for 2021 is (B)ordering Britain: Law, race and empire by Nadine El-Enany and published by Manchester University Press.

Description – (B)ordering Britain argues that Britain is the spoils of empire, its immigration law is colonial violence and irregular immigration is anti-colonial resistance. In announcing itself as postcolonial through immigration and nationality laws passed in the 60s, 70s and 80s, Britain cut itself off symbolically and physically from its colonies and the Commonwealth, taking with it what it had plundered. This imperial vanishing act cast Britain’s colonial history into the shadows. The British Empire, about which Britons know little, can be remembered fondly as a moment of past glory, as a gift once given to the world. Meanwhile immigration laws are justified on the basis that they keep the undeserving hordes out. In fact, immigration laws are acts of colonial seizure and violence. They obstruct the vast majority of racialised people from accessing colonial wealth amassed in the course of colonial conquest. Regardless of what the law, media and political discourse dictate, people with personal, ancestral or geographical links to colonialism, or those existing under the weight of its legacy of race and racism, have every right to come to Britain and take back what is theirs.

Freedom Time: Negritude, Decolonization, and the Future of the World

Our first book for 2021 is Freedom Time: Negritude, Decolonization, and the Future of the World by Gary Wilder and published by Duke University Press.

Description – Freedom Time reconsiders decolonization from the perspectives of Aimé Césaire (Martinique) and Léopold Sédar Senghor (Senegal) who, beginning in 1945, promoted self-determination without state sovereignty. As politicians, public intellectuals, and poets they struggled to transform imperial France into a democratic federation, with former colonies as autonomous members of a transcontinental polity. In so doing, they revitalized past but unrealized political projects and anticipated impossible futures by acting as if they had already arrived. Refusing to reduce colonial emancipation to national independence, they regarded decolonization as an opportunity to remake the world, reconcile peoples, and realize humanity’s potential. Emphasizing the link between politics and aesthetics, Gary Wilder reads Césaire and Senghor as pragmatic utopians, situated humanists, and concrete cosmopolitans whose postwar insights can illuminate current debates about self-management, postnational politics, and planetary solidarity. Freedom Time invites scholars to decolonize intellectual history and globalize critical theory, to analyze the temporal dimensions of political life, and to question the territorialist assumptions of contemporary historiography.

Our first book for 2020 is Theft Is Property! Dispossession and Critical Theory byRobert Nichols and published by Duke University Press.

Description – Drawing on Indigenous peoples’ struggles against settler colonialism, Theft Is Property! reconstructs the concept of dispossession as a means of explaining how shifting configurations of law, property, race, and rights have functioned as modes of governance, both historically and in the present. Through close analysis of arguments by Indigenous scholars and activists from the nineteenth century to the present, Robert Nichols argues that dispossession has come to name a unique recursive process whereby systematic theft is the mechanism by which property relations are generated. In so doing, Nichols also brings long-standing debates in anarchist, Black radical, feminist, Marxist, and postcolonial thought into direct conversation with the frequently overlooked intellectual contributions of Indigenous peoples.

The group is committed to the following three key reading group ethics.